Another dark fantasy story: Sins of the Mother 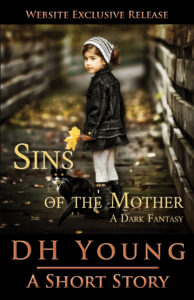 You guys ever have the kind of day where nothing goes as planned? But it’s all still sort of okay?

Well. Of course you do.

You know what I mean? It’s all fine. I’m not sure what I think of the story itself, but then I never am. I could see it being a prologue to something else, or an origin story for a character I use later. Something like that. And, after all, it was fun to write.

The title image ought to link to its page on my site, if you guys would like to check it out. Email subscribers can also find a link to it on the members-only download page…I sent the links out in my last email, if you missed it. But if you re-subscribe (no need to unsubscribe first), you’ll get re-sent the link anyway.

I’d love to hear what you guys think of the story. It’s going to live its life on its own terms, as they all do, and I can’t do much with them once they’re done. Mostly because I’d rather learn what I can and apply the lessons to the next thing. But it’s nice to think they might find friends in the world. You might like it. Hate it. Buy it dinner?

Meanwhile. Have fun out there!