In which I enter a bookstore 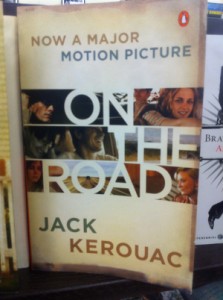 I know. To thine own self be true, and all that. Which, since the self under discussion happens to be mine, and I’m using the above as a title, means I ought to display my physical ownself right here whilst sporting some sort of ridiculous costume.

Maybe next time. A tutu? Other suggestions? You never know; I might be in the mood. Or maybe I could get into the mood. Feel free to tickle my fancy in the comment section.

Moving on. What’s the first thing that strikes you about this pic? Yeah, the one over on the right.

Obviously, it’s that I’m indulging in a pretense or twelve. I haven’t read this particular epic tome. I’ve tried it a few times, but no. Couldn’t get into the thing; not enough zombies was my guess.

Besides that, though? For chrissake, a major motion picture? Does anybody really say “motion picture” anymore outside this phrase, and does it exist anywhere but on book covers designed by idiots morons tin-eared poltroons strangely socialized numbwits products of (very) recent public education?

Do you suppose anyone, anywhere, supposes people will pick this up despite never having heard of it because they read on the cover that it was made into a movie they haven’t seen, however major it was claimed to be? I suppose it’s fucking unlikely possible. Maybe I’ve even met this person. Maybe you have too. Suggestions as to his or her suppository identity may also find a loving home in the comments. But I won’t read them because it would be mean. 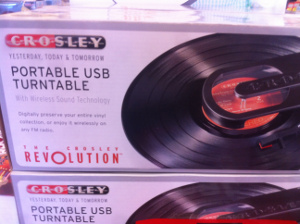 Okay, so that wasn’t actually the first picture I took in the store. I originally found this item, and TBH I took the pic to send to a friend who buys ridiculous gadgets. (Hi Tom!)

Notice, please: I was in a bookstore. This, uh…revolutionary?…item, while admittedly cool as hell, is not a book. It may come with an instruction booklet of some sort, but still. There Are Limits.

Though obviously I’m wrong about that. See, here’s my actual take on it: paper books are sort of retro and cool. So are vinyl records. That bookstore owners agree and figure they might as well cash in on the notion is charming and honest and fatalistic in a way I hadn’t seen coming, but there you are.

Therefore the same people will probably like both, or book-lovers will at least know goofily geeked-out friends who’d appreciate vinyl.

Right now I’m trying moderately hard not to crack a joke about lovers of books and lovers of vinyl. But I have no idea why I’m bothering to hold back. Because guess what else I found?

For the life of me I can’t think of any reason this shouldn’t be in a bookstore. I mean, sure, so it’s probably impure somehow or other. But so what? If you’re not a reader, you probably haven’t heard of 50 Shades.

So I have, basically, no reason to include the pic here except that I took it and thought it was funny.

Still. Can we all take a moment to imagine the after-hours fun that is probably happening in every single bookstore that carries this? And how we haven’t been invited?

Though if being left out is more me-specific, please don’t tell me. Unless you’ve got awesome video. Or even audio, because I could get into that too.

You know, I’ve always figured bookstore employees are all totally erudite. I don’t know exactly what that means, but it sure sounds sexy doesn’t it? I’ll bet I was a lot more erudite when I was younger. Or at least, basing this on my memory of mirrors I’ve passed recently, I doubt I was less.

Anyway I finally found the sort of thing I never entered a bookstore for but will from now on. Over on the left? Totally my speed, and I’m glad to see there’s a place for me amidst all the sex-play and book-cover dumbassery.

It had been nearly a year since my last visit to a bookstore. But I’m now ready to make a prediction. Have you guys seen Idiocracy? ‘Cause I have, and it was also exactly my speed.

You see where I’m going with this, right?

If I can hold off and avoid entering a bookstore for another year or so? The delayed gratification will make my eventual full release even more satisfactory. I imagine by then they’ll have mechanical aids or even pills if I need them.

Besides, I’m old and not as erudite as I used to be. Not like I could do that every day, so I might as well wait until they’re ready.

Have fun out there.