Hello World: From Biology to Software? 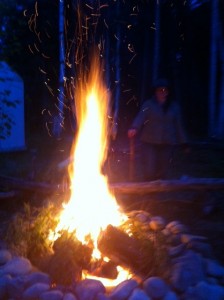 While sitting around the fire watching flames shoot sparks into the air, I wonder if I can actually make this work.

I’ve spent the last seven years working and going to school to be a biologist. I toed the line. I managed to get my education without becoming a total mindless automaton. I persevered and emerged with my degree ready to begin my career or continue with school so I could contribute to society. I planned to do something important for humanity like research cancer or do genetics work.

The hammer drops. The bloated government establishment leads to an economic collapse, the job market bottoms out, and all the sudden graduate schools are only taking 4.0 geniuses that never took so much as a summer off to have a ‘real’ job. It is now my eighth month of unemployment, sixth if you don’t count the two months I spent getting rejected from graduate school despite my ten years of employment experience, my two years of teaching experience, and my six months of research experience. Oh well. What the hell do I do now?

I’ve known about Cabin Fever Software for a while as David and I had previously been boat dock neighbors (a story for later perhaps). Software is a fairly alien subject to me. Of course I use software, I even remember the first version of Microsoft Golf (my dad was a fan and a database support guy for Sprint when I was a kid). To me, computers have simply been tools to produce projects and assignments for school and work. It was interesting to listen to David talk about it because it was his thing, and it is usually quite fascinating to listen to people talk about their passions. It never crossed my mind that I could be useful in such an endeavor, after all I was going to save humanity from genetic disorders and disease….

Last month David asks me if I would like to help him with Cabin Fever Software. My first reaction was something along the lines of “I don’t know anything about programming or software.” I think David said something like “exactly”. The premise behind all this was that he needed a non-techie to look at his user interface to see if the average small business owner could follow it. In general he needed the average internet user around to say “what does this mean” and “I don’t get it”. In my current disillusioned state I remained ambiguous.

After another week of working on my car, organizing my sock drawer, and watching my in-laws argue (of course I didn’t have my own place, unemployed remember?), I realized that it came down to this: I didn’t have anything meaningful to do. My prospects have dwindled to zero. Here is a long time friend offering me a share in his start up business, all I had to do was step up and learn something new. I’ve been shoving information into my brain at a ridiculous pace for years, whose to say I couldn’t let David and I be the ones to determine the new curriculum? Here I am writing a blog for the first time in my life from the living room of a cabin with the hum of the generator outside. David offered me something meaningful to do, and I was almost too stupid to accept because it wasn’t what I had already learned about. Laziness.

Yes, Cabin Fever Software is meaningful. If you don’t understand that sentence, you should read David’s entries (for one he is a better writer). We are going to help small businesses get what they need and generate products that actually help people. Let me put it in terms I can relate to better (I’d say terms you could understand better but who are you anyway?). When you go to the doctor with a complaint, the doctor is going to assume its the most common ailment with those symptoms and then prescribe a medicine that works for the highest percentage of people with that ailment. So if you are lucky enough to be entirely common and your illness is also entirely common, then you will be helped. If you or your illness are in any way unique there is likely no help for you. If there is one thing I learned from my biology training is that there is no true homogeneity in nature. We are not all the same. There is no cure all. Why should businesses be any different? Just as I think personalized health care is the only way to address medicine, so too do I like the idea of personalized software for small businesses.

Go easy on me, if you didn’t catch it earlier, this was my first time (blogging!).