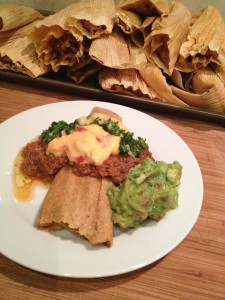 It’s actually Christmas Eve, and yes I think that means something, but…well, traditions vary. For instance: I did a lot of whatever growing up I was willing to do in San Antonio, and learnt well that this night is, invariably, a night for tamales.

We used to buy them in advance (sometimes waiting for hours in lines that snaked enormous distances over tile floors and rough concrete, but they were so good), but my little family does wander–so we started making our own. Now we’re even weirder than that, ’cause my stomach won’t tolerate wheat & also carbs are hard on me, and don’t get me started on this stuff ’cause I won’t stop anytime this year…so anyway, we made them today with flaxseed meal and coconut flour. Bizarrely, they’re wonderful. We combined that with chimichurri (based on a recipe from Los Barrios, an also-wonderful restaurant in San Antonio), chile con queso, some chili I made in a regrettably and not-to-be-repeated tomato-free fashion (good, but sheesh, not quite right), and some excellent guacamole.

So I sit here, musing on family and togetherness. We bought a plane ticket for an ex-foster-kid type a few days ago ’cause of a self-inflicted but nonetheless real catastrophe, but canceled it the next day ’cause he decided to try making things even worse for himself for a bit longer. He’d have ended up on the same flight as my mother in law, which might have been interesting. There’s some history there.

Coincidentally? Said mother in law, no more interested in stereotypes than she should be, had consented to bring a gun to us via checked baggage. This gun, see, was stolen once by a homeless kid we’d previously let stay with us for a few days, mostly in recognition of some good things the kid had done on behalf of yet another kid. Was it an evil act on Homeless’s part? Yes…and no, not really. He’d told me before we left town that he was desperate enough to do something to get himself put in jail, because he didn’t know what else he could do with his life. I put him off with platitudes and a $20 bill. So…yeah, he “broke into” our house (the door didn’t actually lock) and stole the gun. Not a great moment for anybody. But this kid came from such a tough situation. His actions, his responsibility? Sure. But what would I have done, if I’d had to live his life? Probably not as well as he did. I wish him well.

Then, see, the uncle of an ex-foster kid (not the same one we mention above, but actually the same one Homeless more than once befriended and benefited) bought the gun (and maybe another of our guns with it…reports, coming as they do from people, do vary) with a pot of weed, and then got himself incarcerated for trying to sell it to an undercover cop, or a snitch, or some such person. Of course he could have sold it to me with much less risk, but people invariably do whatever the hell they do.

So that’s how we got that gun back. But one of my relatives reacted to the theft of our belongings by going into our home and grabbing a different gun “for safekeeping”…but then never returned it.

Also, the gun we got back? Well, the cops actually released it to my mom when she came into the interesting little town in which my family has altogether too much history, ’cause I was in Maryland. Mom’s had it ever since. Oh, and…well…it’s like this: it’s been stolen again–only this time from my mother in law’s baggage. Either the TSA or some baggage-handler grabbed it from her checked suitcase.

I’m musing on all that, while also contemplating and perversely enjoying the image of a fire we’re streaming via the internet to project onto our living room wall, and I think mostly this: the earlier kind of theft was more human. More personal. And frankly I’d give anyone who was involved a hug if I happened to run into one of ’em. Not that I’m especially forgiving. More that it’s just, in the end, stuff. I have too much stuff anyway.

Oh, and the kid whose uncle is rotting in prison for selling my gun? He’s in a bad spot. Gets beaten and generally treated badly, last I heard. And the day after Christmas is his birthday. Once upon a time he’d have celebrated that, at least partly, with us. I wish he could do it now. I wonder how the hell he feels about his uncle, who by the way is insanely talented with his voice and guitar. The kid has a lot of musical talent too. The uncle, though, could probably be living very well indeed right now if he’d only given himself a chance to do it.

Meanwhile I have my wife, daughter, mom-in-law, and two (female…trend, much?) cats around me. I’m well-fed. Well entertained, too. And I don’t know what to think about people, either individually or in bunches.

Also I finished the first draft of a book that’s been in my mind a lot on the winter solstice, coincidentally with a final scene that also occurs on the winter solstice, and I’m in the midst of writing something that…well, it’s a sequel of a book that I didn’t think would ever have one when I was writing it. So I say: Bleed on the Sky is the name, because the damn thing has blood in it, because if I’m doing a sequel I’m doing it my way.

As if anyone ever tried to convince me to do otherwise. Still, I like where it’s going.

I don’t know what to tell you, people. I’m glad you come by and talk to me. From time to time I hope I can tell you an entertaining story. And this is a good time to think about friends and relations, and maybe even strangers. People in general. If you have a moment to spare for them.

They may not notice that you bothered. But I suspect you will. At least, I have. It’s working for me, just at the moment. And I’m telling you about it, though I’m aware there are other schools of thought and also that I am not today offering anything original.

Regardless. Have fun out there?

Tomorrow, by the way, is all about the smoked prime rib and mashed cauliflower. I hope your day will go at least as well.