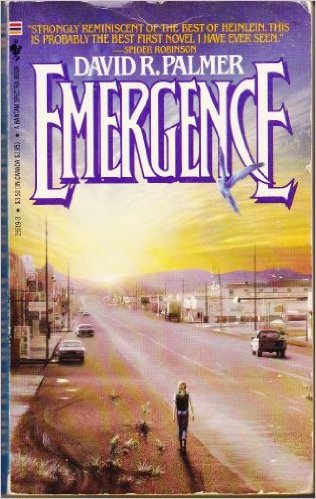 Just so you know, this post is fairly ridiculous. I’m reviewing a book that was published in 1984. It is now quite thoroughly out of print. Quaint, yes? And as far as I know, there is no (official) ebook version. But this novel affected me strongly when I read it way back when…so much so that I’ve never read the sequel. I’m saving it, you know? For the end times, or something.

Which…well, it’s a post-apocalyptic YA SF sort of book, so that might happen. Right?

This one, like Heinlein’s Podkayne of Mars, has just stuck with me. I’ve wanted to try my hand at creating a plucky, brave, smart, but vulnerable hero-child for quite a while. Which is where I’m going with Destiny’s Dance, by the way. It’s expanding…to at least a novel. Maybe a trilogy.

So, what happens in Emergence? Lots. This novel predates the USSR breakup, which might make it a bit difficult for younger readers. But anyway, most people die. Candidia Smith-Foster and her parrot Terry don’t. For reasons that (I swear!) seem believable, they happen to be in a bomb shelter as hostilities break out. Missiles fly. Stuff happens.

At least they don’t die at first, right? No spoilers here. Candy, it turns out, is a special sort of person, a probably-improved sort of human. She’s not vulnerable to the disease that’s killed off most of humanity. She doesn’t know any of this, so when she finds out…well, where are the others like her? Did they survive? If so, where? How come nobody ever told her anything?

Being a plucky adventurella, she sets out to Make Things Right.

This is one of the few paper-type books, out of thousands, that I still own. If that means anything to you. I read it again recently, to inspire myself to write something of my own.

Interested? Go buy a copy. And if you happen to know David R. Palmer, who for all I know is still out in the world somewhere, tell him to get off his ass and write more books. Please?

Also! The new-fiction count for today, all on PROJECT II (about which you know little, in theory), was 2782. Not bad. I’m hoping for better.

So. Have fun out there?