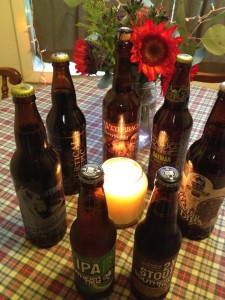 I’m going to try something new. Every Wednesday, my plan sez, I’ll post some free fiction right here in the blog. A story, a chapter, or something. In honor of Beltane (aka our wedding anniversary) I’ll start with Pagan Sex. I may interrupt it with something else once in a while, but otherwise it’ll be one free chapter per week till it’s done, at which point I’ll try something different.

I figure it, ah, fits. Ahem. Anyway, this may be inspired by our post-barefoot-hike activities (see pic –>) but I think it’s still a good idea.

Jeanette, a college student, has just learned she’s pregnant. To make matters worse, she’s loaned money to her boyfriend…and he’s lost it in a poker game. But one of the other players finds a way to help her get it back.

John plays poker for a living. He and Jeanette fall in love…but something terrible happens to Jeanette during a poker-game robbery. John blames himself, and gives up the game. For fifteen years, he’s been raising their son while running a bookstore in Austin, TX.

But then John finds evidence implicating his mentor, who died during the robbery. And he starts to question the assumptions he’s lived with all this time.

In spite of himself, John is pulled back into the poker-player subculture as he tries to unravel the mystery. His mentor’s family, who turn out to be Romani–aka Gypsies–would also like to know what happened. More than one of them has already died because of the robbery and its aftermath.

In alternating chapters, Jeanette tells the story of how they met, fell in love, and were married. From fifteen years apart, John and Jeanette each try to understand the events that led up to the robbery. Who was involved? Is there anyone left who knows, or who might have been responsible?

And: what happens next? Is there a path to redemption? If so…for whom? In Pagan Sex–a tale of poker players, Gypsies, mystery and romance–it’s hard to know just what is possible.

Freddy Shackleton stumped around a corner of the “B” building. Chest pains, smoke from the dump fires, the Young Gadjo sneering at him and swaggering like a boy who’d never been laid—was this why he had come to America?

No. Obviously it was to fix dishwashers. Freddy waited for the idiot boy to open the resident’s apartment door. Fifteen years in the job, fixing anything that broke, stretching the owner’s dollars till they screamed, and Freddy still didn’t get access to the apartment keys on his own. Who trusts a Gypsy? Naturally he had made a duplicate of the key to their cabinet just in case he needed them someday. But it was offensive. Fifteen years.

Inside, Freddy grunted as he lowered himself to his knees in a stinking puddle of water in front of the dishwasher. Now his pants would be stained. Perfect.

He began removing the screws that held the machine in place. The Young Gadjo leaned on a counter.

Freddy twisted his neck to glare at him. “Don’t you have something better to do?”

“I gotta be sure you fix it right. If the buyer checks with the lady who rents this place we want her to say everything’s in good condition.”

Freddy pulled the dishwasher out, looked behind it, and nodded. “Stay here, then. Don’t let anybody steal anything. I need to get a hose.”

Freddy cocked an eyebrow at him, then said what he thought. “The roofs leak. See that stain? Your dad hasn’t painted these buildings since he bought them twenty years ago. They were painted badly, whenever it was done. They have almost no insulation. We are half a mile from the city dump, which has been on fire for two weeks. Smell that air? Yes? No buyer will care about a dishwasher. Okay? Also, since you ask nicely, I need a new hose because the rats—who live very well here—chewed this one to get to the water inside.”

The boy scowled. “Don’t tell anybody about the rats! If you do, I’ll tell my dad to fire you. What are you gonna do, huh? You’re too old to get a real job.”

Freddy measured the boy. Some of Freddy’s family were fond of him, because they had known him since he was in diapers. He had been a sweet child, even if born an outsider…a gadjo. But as a teenager this boy had grown stunted in spirit, with all the soul of a hedgehog.

Freddy grunted a laugh at the thought. Before Freddy’s father had brought their kumpaniya across the Atlantic, all the families together, Freddy and his people had eaten many hedgehogs. All over Europe.

“Stay here,” he told the boy. “I will be back with a new hose. If I need to buy more of this size, which I might, it will be half an hour.”

Outside, drifting smoke from the dump fires stung Freddy’s eyes. Buda, Texas was just south of Austin…but it stank like Freddy’s memories of Budapest. Back in 1956, when he and his family had left that place. Back then, Freddy had seen boys younger than the Young Gadjo dead and twisted in the street. One had been crushed beneath a Russian tank while Freddy—Ferenc, then—and his older brother had watched, hidden behind an expensive and useless Chevrolet.

What would this boy have done, if he had been there? Did he carry a knife? A gun? Extra food?

Never mind. The boy would never learn, and he was not Freddy’s problem.

On the other hand it was four o’clock in the afternoon, and Freddy had a meeting at six. Plenty of time to fix the dishwasher…but the resident would not return for three days. Freddy decided the boy could wait in the apartment until he got tired of it. Perhaps it would be good for him.

Freddy went to to the leasing office and spent the next hour on paperwork instead.

But he wondered: how had he done this to himself? And why? He had not always been so…settled.

Back in the apartment he and his wife Cybil shared—ten percent off the rent; this was a deal?—Freddy lifted a silver bracelet with a strange triple-spiral design out of the box he’d put it in nearly fifteen years before. Because it had belonged to his dead brother Janos, Freddy was supposed to consider it unclean. Marhime. Along with Freddy’s whole life in this place, maybe, according to the beliefs he’d absorbed as a child. Shrugging, he slipped the bracelet onto his left wrist anyway. His wife glared, but what did she know? Today, it felt right to wear the thing.

And it might get a reaction from the businessman Freddy planned to meet, who had known Janos long ago.

Freddy did not trust the man. Why was he planning to buy this apartment complex? Supposedly he would demolish the apartments and build something new—not that Freddy was going to tell either the Young Gadjo or the boy’s irritating father about that—but the businessman had privately guaranteed he would provide a job for Freddy and also a new place for Freddy’s people to live. What was he up to? And why now?

Freddy nearly made it out of the apartment before his sister slammed her way in through the front door. No such luck.

“Look at the Rom Baro!” she said, taking him in. “Big man! Where are you going, all dressed up?”

Freddy shrugged. “Portia, I am going to a health club. This is how they dress there. You know I have a meeting. It is important business.”

“Oh, important! At this meeting what will you do? Will you tell your gadjo businessman that the Gypsies need a place to settle? That we have lost our spirit, that we are beggars now?”

Freddy grinned at her. “We have always begged. When we had to.”

“You know what I mean!” Portia grabbed the hem of her skirt as if about to toss it into the air, but neither of them could keep from smiling. “You don’t care about the old ways anymore, old man.”

Freddy shrugged. She knew better. But he answered anyway. “I care. But I am already unclean, and this health club will not improve matters. Tossing your skirt now won’t defile me—it will only show off your fat thighs.”

She made a fist, then grinned and stood aside. “Be careful today. This man has a plan we don’t understand.”

“Of course he does. But we are the Gypsies, not he. Tricks are our business, not his.” Freddy straightened up. “And I am Rom Baro here.”

Freddy pretended not to notice the look she and Cybil exchanged. But truly he did not know what to do. Why, he wondered again, had he allowed himself to become so complacent, so…frail and ancient and stuck? He was only sixty-five. He still had some life left to live—didn’t he?

There had been starvation in Europe. Much worse than anything here. But new lands had crept over the horizon as the kumpaniya had walked. Now the kumpaniya were mostly scattered to the winds, and Freddy was Rom Baro to fewer than twenty of his people in Buda.

Still. Perhaps this nearby fire that fouled the air was a sign.

It would be something to lead his people on the road again. Perhaps they could even return to Europe. Maybe…maybe there was more adventure to be had.

Freddy sighed. Perhaps this businessman would give money for transport in lieu of a job and a home?

But for now, a health club. For now, Freddy would be an American.

He headed for his cherished ’57 Chevy, a rare spring in his step. He had been so stagnant, for so long. And it thrilled him to realize he would soon move on.

If he could help it, he would never stop for more than a few days again.

Want the whole book at once? Get it from one of these links. Or check out my other fiction if you’ve a mind.