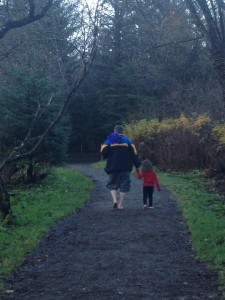 First of all, the ground here in Juneau is sorta cold in late October. But some days are colder than others, and sometimes Brigit wants to walk “barefoot in the goopy goopy mud!” with Daddy. So that happens, and it’s very…er…cool. Here’s a pic! (And yes, she has a jacket. But she’s making me carry it for her. Because that’s one of my jobs.)

Actually we should’ve gotten a few pics from yesterday’s hike. It involved lots of sliding & slipping around in black mud on the Point Bridget Trail. Totally worth doing, and we passed people wearing big ol’ rubber boots while we wore sandals (I’m partial to Xero Shoes, myself) and…okay, fine: I was barefoot about half the time. There are sections where the trail is basically elevated planks, though, and I got much better traction on them with the sandals. Will this ridiculous behavior last out the month? Maybe. And maybe not.

I had something else to tell you. Even though I’d rather talk about walking around town with bare feet. But here it is: my site’s email-stuff seems to be somewhat broken-er. Maybe even brokenest. The contact form hasn’t worked since I upgraded WordPress (grr), and also the subscriber emails haven’t been sent since I started encrypting connections. But the second part should be fixed as of today. I’ll work on the first part later tonight or tomorrow–right now there’s a story that’s trying to get my attention. So I’m-a-gonna go write on it a bit.

Thanks, Heather, for pointing out the second email glitch. And thank you, everybody else, for bearing with me. If you do and are, I mean. Otherwise I’m obviously not talking to you. Am I? {8′>