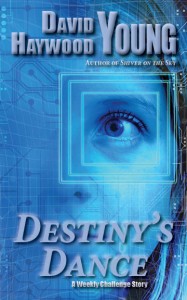 Lucky number fourteen! Only this one’s a little different. Much to your surprise? Before we go any further, please let me point this out: at least it has a cover. That’s something, right? {8′>

Thing is, it’s not really a short story. It may turn out to be a novel, or a novella. I’ll try to make it interesting as we go along…but the plot has barely started here. Even though this is about 50% longer than most of my short stories so far.

Originally I thought I’d do a bunch of independent stories, and I guess I’ve committed a few. But now there’s this thing, and also there’s the Marvin stuff, so…I guess they’re turning out to be a couple of serial novels? A chapter or two at a time, maybe? While I’m simultaneously working on writing actual intended-to-be novels. Hmm. Logical behavior, as you can clearly see, is not one of my strong points. As a writer anyway. I start typing and stuff happens. Which is, I guess, better than typing and having nothing happen. Maybe you folks will let me get away with pretending it’s that sort of a binary choice–worth a try, I figure. {8′>

Please let me know how interested you are (or aren’t!) in finding out more about this one. I’ll give you a mini-spoiler here: the protagonist’s name is Destiny. Not that she gets to use it much. I’d love to pick this one up again sometime soon, but if I’m the only one who likes her it may not be worth the effort.

Kind of a cool idea from my perspective: gauge reader interest before completing a novel. How does it look to you?

Destiny (school name: Melissa) is nearing adulthood. She’s looking forward to taking her place among those who work to make life possible for the rest of the world: the Employed. Of course she may not qualify, or may end up doing something she doesn’t like. It’s not really up to her. But she has high hopes, and is working hard to master the skills she may need.