Pictures, attitudes, and a very short preview of The Secret 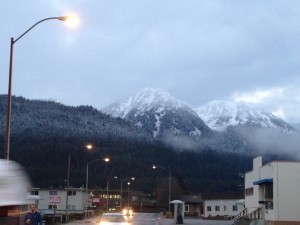 Howdy! I’m writing this one just for fun. I hope it’s fun for you too. If not, see someone or other about getting your money back. I mean, fair’s fair. Right?

So, as you look over to the right, you can see a scene from a few mornings ago near our hotel. Mountains, with a bit of snow. Typical ugly Alaskan flat-topped buildings (and no, that doesn’t make a lot of sense to me either). And with your basic raggedy-clothed guy wandering around. Because people don’t dress up much, here.

We’ll be moving into a condo in Douglas, which means across a bridge and on a large & mountainous island, but not until December. Nice view of Juneau from there, and I’ll share it with you sometime.

A friend of mine visited me in Anchorage years ago, and after a few days was moved to remark that its suburbs looked fairly normal, if a bit uglier than most, but somebody had forgotten to put a town in the middle. I laughed and agreed. “Welcome to Anchorage,” some of us have heard and said far too many times: “Not a bad place to visit, and only twenty minutes from Alaska.” 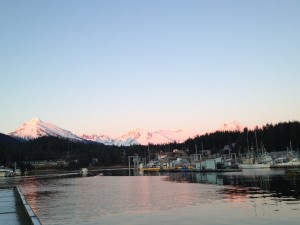 Juneau actually has at least as much of a noticeable and distinct downtown area as Anchorage even though it’s much smaller in population. Maybe even a bit more. Still not ideal for me, ’cause I so love wandering around areas with a lot of concrete and dark alleys available around 3 A.M., but it’ll do me for now. Because I don’t actually like living near all that concrete.

Now, here (on the left, probably) is a place where I actually did live. My wife and I were on a boat, mostly in or around Auke Bay (where we took this picture–we have better ones, but this is the most recent), for about three years. It was fun, but here’s the thing: boats always need to be worked on. It’s inescapable. And nobody wants to work on a boat when it’s raining or snowing. A lot of work actually can’t be done under those circumstances. Then, when the blue skies take over? Who’s gonna work on a boat when a good hike is there for the taking? So our fixer-upper wasn’t ever, and I’ll live on a boat again sometime but it’ll be in a warmer spot.

Alaska’s beautiful, but there’s more than that going on. 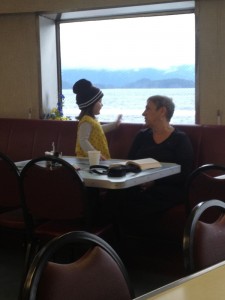 Here you can see my daughter Brigit talking to one of her many new friends on the ferry, on our way here from Washington (I mean the state, though we actually started our journey a few miles from the city). It was immediately obvious, right after we got on the boat, that we were in a place where people talked to each other. It’s a fun trip, and I recommend the ferry over a cruise ship. Unless you’re one of those alien plastic-hair people who like a bit of coddling. Not that there’s anything wrong with that.

So, the thing is, I walked downtown to a restaurant with a view for lunch today. It was one of those rare strangely sunny and dry days. It felt as if I’d gone somewhere else. A vacation, maybe, if short. My feet were bare and comfy on the sidewalks, but there was a deep ache (not unpleasant…yet) when we passed through what shadows our local buildings can manage to cast. A passer-by stopped and offered to give me one of his shoes. I declined, with thanks. We had a good meal, with a couple of good beers (one each), and then I came home to write.

And then I did some writing. Here, finally, is a preview. The first few paragraphs of The Secret:

If you’re reading this, I’m almost certainly dead. But I imagine you know that already. I don’t see how it could be a surprise.

Worse, from my point of view, is that everyone I ever knew or loved probably died with me. Or before. I’m not talking about aging and the inevitable march of time here. Most likely no part of the end was pretty or peaceful. And even if I’d known what was coming from the beginning? I don’t know what I could have done to save any of us.

Still. Maybe you’ll find something in this that will help you. Before it’s too late. I hope so.

I might as well start with the first day I noticed anything unusual. Nothing before that matters anyway.

The lumpy road was smooth butter under my bare feet, the clean green air filled and caressed my lungs, the March sun warmed me and then left me alone…days like this were what I had missed about running. Except it had never been so good, before these last few months. Too many injuries along the way. Barefoot running sounded so ridiculous—until I’d tried it. Now I could barely stand shoes at all.

I’d spotted a mob of urchins ahead, cavorting in hydrant-spray heaven, but hadn’t seen the three boys lounging in a pickup bed until I came abreast of them. I grinned, and thought about answering the twerp as my feet carried me past, but life is sometimes good: I heard a loud smack.

Sudden coughing. Then: “Dangit,” came the reply as I left them behind me. “You almost made me swallow my cigarette!”

I lost my grin. The breeze had carried the smoke away, so I hadn’t noticed what the kids were doing…but the smoker couldn’t have been more than nine years old. About my daughter’s age. She probably knew him.

Up ahead, water coursed down the curb on my side of the street. I moved left to avoid it, noting the slightly worse-than-usual yellow-brown tinge as our local drinking supply fountained into the air. I suspected Henge’s city fathers opened our hydrants periodically in an attempt to clean out the lines just prior to some sort of mandated testing—because otherwise they’d never bother. But it was fun for the kids.

Just after I passed the shrieking mob I came upon an old gray tomcat crouched in a stand of unmowed grass about three feet from the pavement. Back when he was a kitten he’d been friendly, and I’d stopped to pet him a few times while walking by. Then as a young adult he started running away from me. Today, fat and certain of his place in the world, he bared his fangs and hissed at me without bothering to so much as lash his tail otherwise.

I hissed back, which surprised him not at all, then padded onto Old Center Avenue. At the same time the breeze shifted. Rain coming…I looked up and saw dark gray clouds moving in…for the kill, an inner voice cackled. I grinned again. I loved a good storm.

So, there’s more where that came from. I could post some of it right now, but I think I’ll hold off until the thing’s published. Ideally this will whet your appetite. Heh heh heh.

Or, of course, it may not. There’s bad stuff coming for my protagonist. Maybe that’s interesting to you, and maybe it’s not. You’ll have to decide for yourself.

Here in Juneau? We’ve got a bit of foreshadowing of our own going on. The snow is getting closer…as you can see in my final pic for today. A standard local joke is that “somebody cleaned the glacier.” 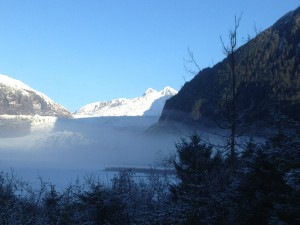