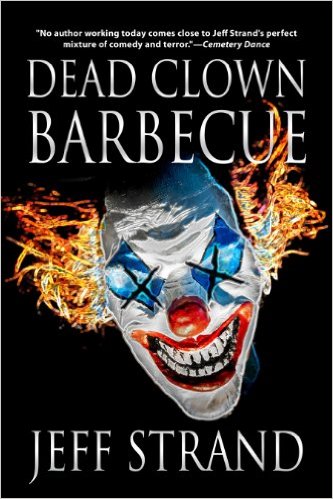 I was an early adopter of ebooks. Sometime I’ll have to tell you the story of the night I tried to con my wife into skinny-dipping with me in what would have been a public place except it was dark. Also there were javelinas, and deer, and strange noises, and she says I danced on an armadillo but the critter’s species wasn’t actually clear to me. It seemed scarier than that, and she’s only saying “armadillo” to embarrass me.

These thoughts are too related. See, that night the only illumination we had–and no, we weren’t lost, though Herself tells the story differently–was my little handheld computing device running Windows CE. On that device, among other things, were some books by Jeff Strand.

Anyway, I’m a fan. His fiction is clever, often disgusting, frequently disturbing, and sometimes even a bit scary. Strictly speaking, I guess this particular book may not count as “indie published.” But I strongly suspect, after my Google-Fu came up short, that it was at least published by a small press. And however this book came to be? I’m glad it happened.

Here’s the description from Amazon:

A man who finds a severed nose on a plate on his dining room table. A bell that can summon Satan (maybe). Casual Fridays at work that get out of control. A cheery outlook on the post-apocalyptic landscape. The final thoughts of a doomed skydiver. A girl punished by having to share a bed with her grandmother’s corpse. Revenge via baking a tarantula into a cake. A romance between two carnivorous genetically enhanced plants. And the lost tale of Fangboy.

These are only a few of the demented stories in DEAD CLOWN BARBECUE, a collection of twenty-nine gleefully macabre tales, seven of which were written just for this collection. There’s even a brand new one about a ventriloquist dummy. Those things creep you out, right? You’ll laugh. You’ll scream. Okay…you probably won’t actually scream, unless you already had issues before you started reading, but you might cringe and get a little spooked.

I’m not going to try to describe the stories, because it’s clearly pointless. I’m not even going to say this is the author’s best work, because my opinion on that varies. Sometimes with the lunar cycles, but sometimes according to…uh…well, something that varies in an eldritch way. There are things like that. Or there should be.

So, if the above sounds cool to you? Go buy a copy. Or buy something else of his. Which suddenly reminded me of another book, and another author, and I have an idea for my next review. Which, right now? Doesn’t help you.

Jeff Strand is damn good at what he does. Also, nobody else does that. Enjoy.

And have fun out there!

(New-fiction word count: 2305. Project I is getting interesting.)