Book review: Off to Be the Wizard, by Scott Meyer 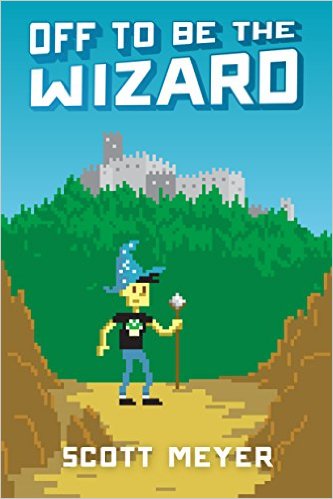 Published by 47North, an Amazon imprint, this is a jewel of a book aimed squarely at the computer geeks among us. Well, and maybe those who are, for whatever reason, entertained by geeks. Maybe including my wife, for instance, but I don’t think she’s actually read this one yet, so I could be flat wrong about the whole notion. But the book sells quite well, and so do its sequels, so there’s something going on.

Martin Banks is just a normal guy who has made an abnormal discovery: he can manipulate reality, thanks to reality being nothing more than a computer program. With every use of this ability, though, Martin finds his little “tweaks” have not escaped notice. Rather than face prosecution, he decides instead to travel back in time to the Middle Ages and pose as a wizard.

What could possibly go wrong?

An American hacker in King Arthur’s court, Martin must now train to become a full-fledged master of his powers, discover the truth behind the ancient wizard Merlin…and not, y’know, die or anything.

See? It’s fun. That description is actually a little bit misleading, but it does mostly capture the tone of the novel, and I don’t want to inflict any spoilers on you folk. So let’s go with it.

I re-read this recently, and if anything it was more fun the second time ’round. I liked Meyer’s other books too. The humor is distributed well, by which I mean it’s not (always) heavy-handed and there’s an actual story involved. Is this my favorite book ever? Hell, no. But I’m glad I found it, and I hope you enjoy it too.

Give it a try, if you’re so inclined. I, obviously, recommend it.

Meanwhile, I’ve finished the first draft of Wednesday’s story. Should I tell you that sort of thing? Or preserve whatever mystery or illusion there might be? If I tell you, well, that’s okay because I’m kind of proud of the thing and I want to share that. On the other hand, what’s the point? You’ll see some version of it on Wednesday, and not before.

It’s currently titled The Room, but I may change that. The first sentence: “This time I wake up with Paul Newman sitting on my bed.”

What do you guys think? Better to tell you stuff like that, or not? It beats me. I’m also not sure it makes any difference either way!