What Happens in September…available in October! 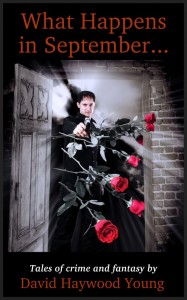 Not that I actually want to make any assumptions about faithfulness. I just thought it was a fun greeting. Um…you know what? Never mind. That whole topic just doesn’t belong here. Though I do hope you’re all enjoying yourselves fully, in ways you find appropriate. I’ll move on now to whatever it was I thought I was writing about.

Aha! The cover pic is a major clue! As is the headline. Maybe I should just quit screwing around (er…) and get to the point, eh?

So: there will be a new ebook out sometime next week. Probably Wednesday or later. Initially the price will be $.99, but the long-term plan is to offer six of the seven included stories individually for $.99, and the collection for $2.99 (with the extra story not available for sale). All this stuff may gang agley, but that’s the plan. For now.

So here’s the story behind the stories: Back in September I wanted to try a new approach to writing shorter fiction. I thought it might be a fun exercise to do 30 stories in 30 days…which was ridiculous, but I set out to do it anyway.

Of course there was no way I could come up with that many story ideas in advance. As for outlining? That wasn’t going to happen. I mean, it would be hard for anybody—but I can’t really write to an outline anyway. If I need to figure out what happens next, it’s easy: I write whatever I think might be the most fun to read. For me. Oddly, that tends to end up creating some sort of cohesive whole. Eventually, and after a lot of rewriting, but it’s what I do.

So I came up with 30 initial sentences, and told myself I could choose one of them per day. I would come up with a second sentence that established some sort of tension or conflict with the first, and go on from there. Blindly, I would discover what I wanted to write about.

Guess what, though? I didn’t write 30 stories.

My basic scheme sort of worked, but I would often get to a point where it felt right to stop, go to sleep, and see what my fingers felt like doing in the morning. It turned out that I actually liked the stories I was writing, and I didn’t want to short-change them.

So…seven stories in 30 days. Each one is an experiment. In a couple of cases I later wanted to change the initial sentence, but I wouldn’t allow myself to do it. And just for fun, I included most of the original 30 sentences at the end of the book. Maybe you, or I, or someone will use them…might be fun.

Anyway, stay tuned (via the blog, twitter or Facebook…or the newsletter signup form in the top right of this page) and I’ll let you know when it goes live.