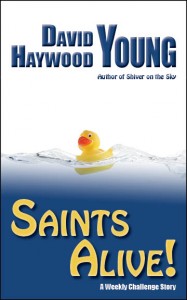 Here’s #9 of 52…more or less. Those of you who are familiar with the What Happens in September… collection will note that it’s not exactly a new story. You’ll get moderately irate. I’ll back away slowly. It may not end well.

So okay.  We started the trek to Alaska a couple of days earlier than we’d planned, which ate into my writing time somethin’ fierce. We ran into RV trouble. We had a cat get lost in the woods for hours (from our POV…she probably knew where she was, relative to those of us who were searching for her anyway). I did lots of necessary but frustrating back-and-forth driving. What else? Oh, before we left some guys showed up two hours late to pack a bunch of our stuff, and then they took two hours longer than their estimate to get it done.

Basically…well, you know the rest. I ran out of time. Hell, . [UPDATE: Duh. Cover is now present, though I’m not totally sold on it.] I always planned to hold the September stories in reserve for emergencies. I just didn’t think I’d have to use one so soon, or just ’cause of a bunch of frickin’ piddlin’ details. But I did.

And yes, I could have pushed through and finished the thing. But I’d have had trouble doing that while maintaining friendly relations with my family. And we’re going to have fun on this trip…if it kills us. GOT THAT?? {8′>

That said? I hope you enjoy the story, especially if you’ve read it before. Or you could write really angry comments, maybe. Either one of those might be fun. Right?

I’m not going to tell you much about this story. I mean, you’re probably already tired of all the preamble given that it’s not a new one, right? So…I stayed up all night writing this (but not recently, alas!) and passed semi-done bits to a friend as I went, drinking beer and incorporating his goofy suggestions. We had a lot of fun. That is all.