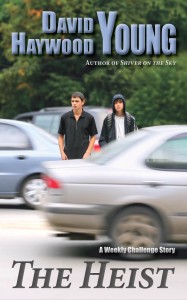 I know, I know: where do I get off calling this a bonus? Didn’t I promise, after all?

Yup! Sure did! But it turns out my brain doesn’t work so well. And I can prove it!

So, um, yeah. It’s free today from Amazon, and will be free for five days.

But, just so you know? This one was tough to write. My wife and I have shared our home with a couple of foster kids. Their lives were (and to some extent still are) difficult beyond belief. So The Heist was my attempt to capture that–but also, and maybe more importantly, to get the associated feelings out where I could look at them.

So it’s personal for me. One of the kids who used to live with us, the one I renamed “Joe Keith” for the story, cried when he read it–even though none of the events described here actually happened, and I never told him whom I’d had in mind as my model for the protagonist. So I guess it worked, sort of. But if you’re wondering: he’s tough, and he’ll be fine. Or…I guess I mean that the real kid will be fine. No spoilers for the story!

Meanwhile, here are the various links you can use, if you’re of a mind, and some basic boilerplate beggary to boot:

Better yet, if it turns out you actually like the story? You could post a review! (That link goes to the Amazon US site, because most of you are US readers. But please feel free to post elsewhere if you’d prefer.)